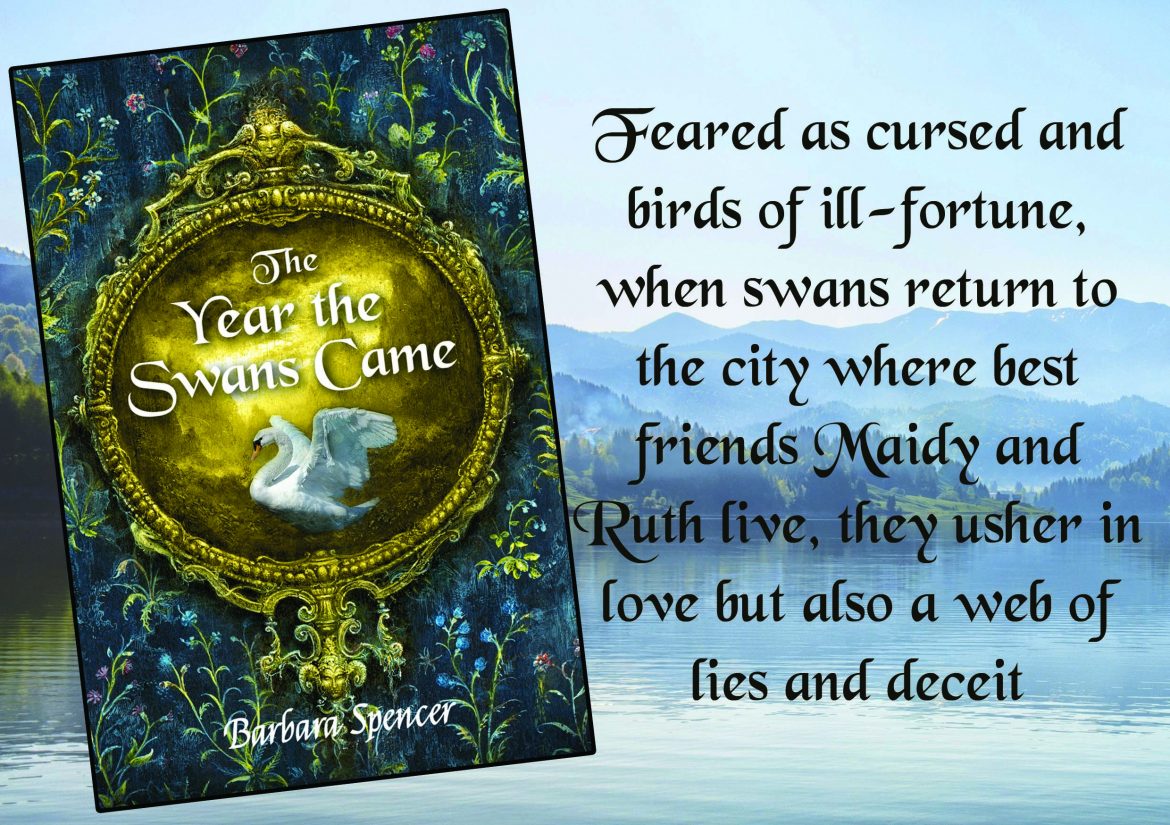 Growing up amongst the ruins of war, four siblings use bridges and cobblestone walkways as a backdrop for their games. Pieter Bader, the eldest, wants to follow in the footsteps of his family, designers of mirrors for royalty since the 17th century, while Maidy, the youngest, dreams of becoming a writer.

Her best friend Ruth, who lives next door, dreams of marrying Pieter, only for him to vanish from their lives late one night.

Is his disappearance linked to the arrival of the swans, feared as cursed and birds of ill-fortune?

What will happen when they return six years later, on the morning of Maidy’s sixteenth birthday?

And who exactly is the charismatic and mysterious Zande?

Follow Ruth and Maidy’s cursed tale of love as they discover what happened to Pieter, and how the appearance of Zande will affect both their lives, unleashing events as tragic and fantastical as one of Maidy’s stories.

Barbara Spencer is an author of my acquaintance who is a delight. Her writing is just as delightful. Her most recent novel. The Year the Swans Came intrigued me from the day it was published last September. As a way to do what I can to get the word out, I invited Barbara to visit me on my blog to talk about her book. Even if my audience here is not large, at least a few more people might be introduced to her lovely new book. Thanks for stopping by, Barbara!

I am delighted to accept! As an author, I am most admiring of your skills, your novel, The Scribe’s Daughter is a delight. Plus you has a grand piano. Our family grand, a Brinsmead, was with us 52 years and I still miss it.

For the past 12 years I’ve been writing for children and young adults, and my first book, Scruffy, was published by Halsgrove in 2007. Compared with today, life for authors, particularly children’s authors was ‘cushy’; with book-signings at Waterstones happening most Saturdays and visits throughout the year to schools. Then with the advent of Ebooks and Social Media, I began to feel that as a children’s author I was now out of step; primarily because all my sales were paperbacks since young children still prefer the smell and texture of a book to a Kindle.

In 2015 I decided to quit writing and ‘cultivermonjardin’ as Voltaire puts it. I found this impossible to do, and have written three novels since. And so I switched genres and now write fantasy/magical realism for adults. My first novel, The Year the Swans Came isavailable at Waterstones and on Amazon and is already a recipient of a Chill with a Book Readers Award.

What is it exactly? Described on Amazon as “Where fantasy and historical fiction collide” Swans is also a mystery – which has presented me with a problem. How do I talk about the plot without giving too much away?

Fortunately, Catherine Kullman the novelist, in her review, says it far better than me:

“As Maidy Bader anxiously awaits her sixteenth birthday, the day on which ‘overnight girls become adults, eligible to be courted, and to marry’ her thoughts return to the past and most importantly to her elder brother Pieter’s sixteenth birthday, the last he spent with his family. No one speaks of him or why he vanished. Life goes on as it always did in the unnamed country. The unnamed invaders have left and those deportees who could, have returned. Among them are the Bader’s neighbours, the Endelbaums. Their beautiful daughter Ruth, who is Maidy’s best friend, has had to give up her hopes of marrying Pieter. Slightly older than Maidy, Ruth is the belle of the college the girls attend while Maidy stays more in the background.

“On Maidy’s birthday, everything changes. Maidy begins to emerge from her chrysalis. Pieter returns as suddenly as he departed, but gives no explanation for his long absence. Ruth immediately claims him, but she is also intrigued by the four strangers, handsome young men, who suddenly appear at the college. She takes their attention and interest as her due but Maidy is surprised to find herself sought out both by gentle Jaan and the strangers’ leader, the charismatic and mysterious Zande. And Pieter is desperate to marry Ruth and complete his apprenticeship with his father, a maker of mirrors.

“But all is not as it seems. This is not a college romance. Unimaginable secrets swirl beneath the surface of daily life and all too soon the unwitting Maidy and Ruth are drawn into the vortex of an ancient tragedy that threatens them all anew.

“I was blown away by this book, enthralled by the beautiful writing, the slow build-up of the mesmerizing story and the wonderful characters. Magical realism of the highest order.”

Catherine is quite correct, both the country and the invaders remain unnamed. The country is Holland and the city Amsterdam. That is where the idea originated. The first of four novels, Book 2, The Click of a Pebble, which is also the first book in the trilogy, Children of Zeus, is out in April. Sound intriguing? It is.

In 1967, Barbara Spencer hi-tailed it to the West Indies to watch cricket, the precursor to a highly colourful career spanning three continents, in which she was caught up in riots, wars, and choosing Miss World. Eventually, she settled in Somerset to bring up a family. In 2010, the publication of Running, her new teenage thriller, has taken Barbara countrywide. Passionate about the importance of books in today’s society, Barbara is happiest working with young would-be writers and is frequently invited into schools to talk about creative writing.

For more info on Barbara find her at barbaraspencer.co.uk

Purchase The Year the Swans Came