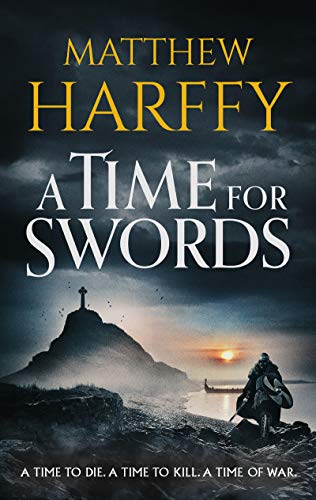 Lindisfarne, AD793. The life of a novice monk will be changed forever when the Vikings attack in a new historical adventure from Matthew Harffy.

There had been portents – famine, whirlwinds, lightning from clear skies, serpents seen flying through the air. But when the raiders came, no one was prepared.

They came from the North, their dragon-prowed longships gliding out of the dawn mist as they descended on the kingdom’s most sacred site.

It is 8th June AD793, and with the pillage of the monastery on Lindisfarne, the Viking Age has begun.

While his fellow monks flee before the Norse onslaught, one young novice stands his ground. He has been taught to turn the other cheek, but faced with the slaughter of his brothers and the pagan desecration of his church, forgiveness is impossible.

8th century England, monks, Vikings, raids, tension and suspense, danger and a lot of battle scenes. What is not to love? I was hooked immediately, but for some reasons other than what one might first think.

In the Hall of the Dragon King by Stephen Lawhead was one of the first “real” books I read when I was young. Granted, the details of the story are different to this one. The book begins with the dramatic arrival of a knight whose dying request propels a young acolyte on a dangerous mission. The fate of the kingdom is in his hands. Another book, Byzantium, also by Stephen Lawhead, “Aidan lives as a scribe in a remote Irish monastery on the far, wild edge of Christendom. Secure in work, contemplation, and dreams of the wider world, a miracle bursts into Aidan’s quiet life.” Again, different details, different story. But both of these books were books I enjoyed in my younger years so bring back warm feelings and happy memories. And each of them have some similar characteristics to A Time for Swords.

It’s difficult to compare these books without giving away spoilers, so I’ll simply say that one element connecting these books, first and foremost, is that they are stories about a nobody who is thrust into circumstances beyond his control and apparent abilities. He is given a moment in time to seize courage and adventure or to turn and hide, denying what is before him and hoping for the best. For those of you familiar with the Hero’s Journey, Joseph Campbell calls this “accepting the call.” And in this case, the hero is an unsuspecting young monk. I’m a sucker for this kind of straightforward storytelling.

I’ve read Matthew Harffy’s books since he self-published his first, Serpent Sword, and I’ve been a fan of them all. He’s been a consistent writer and strong storyteller. In all that time, I’ve had a front row seat, watching him grow and develop his skills. I’ve previously reviewed his skill in character development, storytelling, voice, etc. But this time, I will praise his structure. It’s his strongest yet.

I’m a bit of a story nerd, and I love to look at and analyze structure. As a well-written book in its own right – with a compelling story arc and a full cast of intriguing characters — A Time for Swords is also an effective series opener.

It’s a tightly written book with little that’s unnecessary. Each chapter and scene progresses purposefully and has a function. There is little wasted real estate on the page. The story is satisfying and complete in its own right, but his introduction of characters and events very nicely sets up the events that will be coming in future books. It’s a good story with a promise of things to come. A two-fer, so to speak.

All of the good elements I just mentioned are wrapped up in layers of comfort — good memories that harken back to stories I read in my youth which have stayed with me. So maybe I’m giving the author some nostalgia points he doesn’t deserve, but I still encourage you to go find Mr. Harffy’s books and see if I’m out of line. I don’t think I am.

The book will be released in December, 2020. You can pre-order A Time for Swords at Amazon.com.